From HEP
Jump to navigationJump to search

You have reached the public pages of the Experimental High Energy Physics group at the Niels Bohr Institute, a department of the University of Copenhagen.

What is High Energy Physics? 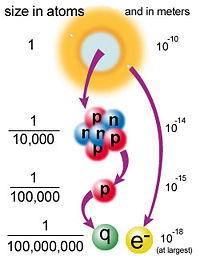 High Energy Physics, also known as Particle Physics, is the field of physics that investigates the fundamental structure of the Universe by studying its fundamental constituents, particles in great details. As the low-energy behavior of matter is properly described in other areas of physics such as atomic physics or solid-state physics this is done by studying the behavior of matter at the extreme energies reached in particle accelerators or observed in ultra-high-energy cosmic rays. 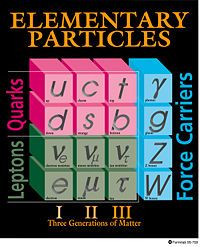 The present knowledge is contained in the Standard Model, which describes how all matter is made up of leptons (such as electrons and neutrinos) and quarks. It also describes how the basic electromagnetic, strong and weak forces act on the leptons and quarks in order to build the world around us. One of the biggest challenges in particle physics is to find the missing piece of the Standard Model jigsaw that enables nature to to give rise to the medley of particle masses we observe. The favored candidate for this is the Higgs mechanism, which requires the existence of a new massive particle: The Higgs boson.

But even though the Standard Model has been verified with impressive precision, it is far from perfect and has many shortcomings in explaining why the world looks the way it does. Many extensions and new models exists today and nobody really knows what lies at the high-energy frontier of particle physics. So the next 10 years will be very exciting!

If you are interested in learning more about Particle Physics, there is an excellent and very pedagogical introduction to the field at http://particleadventure.org. More information and interesting links can be found under our "Outreach" section.

The HEP effort at the Niels Bohr Institute is concentrated around accelerator-based particle physics. Our main effort in these years is the ATLAS experiment at CERN, the world's leading laboratory for particle physics research.

ATLAS : The ATLAS experiment is an upcoming experiment where physics beyond the Standard Model will be sought out. ATLAS will be located at the Large Hadron Collider (LHC) at CERN. When ATLAS and LHC are completed in 2008, we expect to find answers to many fundamental questions about what the Universe is and how it works.

Not only will ATLAS be the largest particle physics detector built so far, but it also represents the biggest collaborational effort in the field ever. More than 2000 physicists from 34 countries and 150 institutions are working together on ATLAS. The Danish contribution is based at the Niels Bohr Institute, and the group here is actively involved in many areas of the experiment. An excellent pedagogical introduction to the ATLAS experiment can be found at http://atlasexperiment.org.

NorduGrid:In connection with the participation in the ATLAS experiment, the group is also heavily involved with the development of the infrastructure which will be necessary to cope with the enormous data flow from the experiment, and how the subsequent storage and analysis of that data is most efficiently carried out. This task will be solved with GRID technology, and the Niels Bohr Institute is one of the major participants in Nordugrid - the very successful Nordic implementation of the GRID.

DUKS: Apart from our accelerator-based effort the group is also actively involved in DUKS (Dansk Uddannelsesorienteret Kosmisk Stråle projekt). This project is a joint Danish project to establish a nation-wide array of particle detectors on high-schools. These detectors will be measuring air-showers from high-energy cosmic rays passing through the atmosphere. The DUKS engagement has served as an excellent pilot project for the next step: Danish AIr Shower arraY -- DAISY.

The HEP group at the Niels Bohr Institute has over time been involved in many experiments. While no exhaustive list will be given, the following experiments have been active areas of work within the last years.

HERA-B: The HERA-B experiment, located at the HERA collider at DESY in Hamburg, took data until spring 2003. The data is valuable for understanding the physics of b and c quarks, and the strong interaction in general. HERA-B also provides data which is important for heavy ion physics, where the behavior of the quarks in the early universe is studied.

ALEPH: The ALEPH experiment was in the years 1989-2000 located at the LEP collider at CERN. ALEPH has played an important role in the development and understanding of the Standard Model as it is today. Apart from measuring the precise properties of the particles carrying the weak force, it has also shown that there exists precisely three generations of quarks and leptons.

What you can do as student

If you are a student looking for a project for your first-year project, bachelor project, master thesis or Ph.D., check our "student" section. We maintain a list of interesting student projects. Please feel free to contact the listed persons on the individual projects to discuss joining the group to do a project.